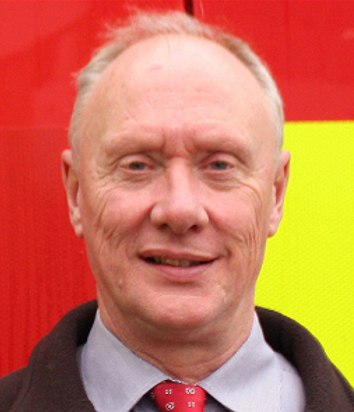 Terry has given outstanding service to our communities since the early seventies, in numerous operational roles across the county, before retiring a couple of years ago from his operational career as Group Commander to continue in a non-operational role, supporting his colleagues as the services Welfare Officer.

Terry’s role includes providing support to current and retired members of the service and their families (from both the operational and non-operational sides) through a range of different and difficult circumstances. Terry makes himself available to chat on the phone, and visits people in their homes, in hospital, in treatment centres and hospices.

Terry has supported families through bereavement assisting them with arrangements for funerals and supporting them through a range of personal, housing, financial and legal matters. He makes sure he stays in touch with people after these matters have been resolved to remain a vital point of contact and assurance that this service still cares for its staff.

Terry has continued to be a champion over the years for supporting numerous fundraising events on behalf of the Fire Fighters Charity. He was also been recognised for his service of 40 years to the Fire Fighters Charity. As a testament to his popularity, reputation and unique style, he received the most nominations in the SAFE awards last year and could have won several categories. He did, in fact win the Exceptional Service Award last year.

Role information: The Business Fire Safety Advisor will ideally have experience of fire safety; however, this is not essential. This role will be subject to Support Services terms and conditions. The successful applicant must be proactive, enthusiastic, and able to…
END_OF_DOCUMENT_TOKEN_TO_BE_REPLACED

Role information: The Business Fire Safety Inspector will ideally have current qualifications and experience of fire safety, though this is not essential. The successful applicants must be proactive, enthusiastic, able to work on their own and as part of a…
END_OF_DOCUMENT_TOKEN_TO_BE_REPLACED

Terry has given outstanding service to our communities since the early seventies, in numerous operational roles across the county, before retiring a couple of years ago from his operational career as Group Commander to continue in a non-operational role, supporting…

An exciting opportunity is developing within BFRS which will see support members of staff providing additional support to their operational colleagues by responding to emergency incidents. The Corporate Plan, approved in 2015 highlighted the need, where appropriate, to move to…
END_OF_DOCUMENT_TOKEN_TO_BE_REPLACED

We use data to identify the groups that are most at risk, recognising trends against local and national statistics, to pinpoint areas to address through targeted engagement. Business and Systems Integration (BASI), is developing a new Premises Risk Management System…
END_OF_DOCUMENT_TOKEN_TO_BE_REPLACED