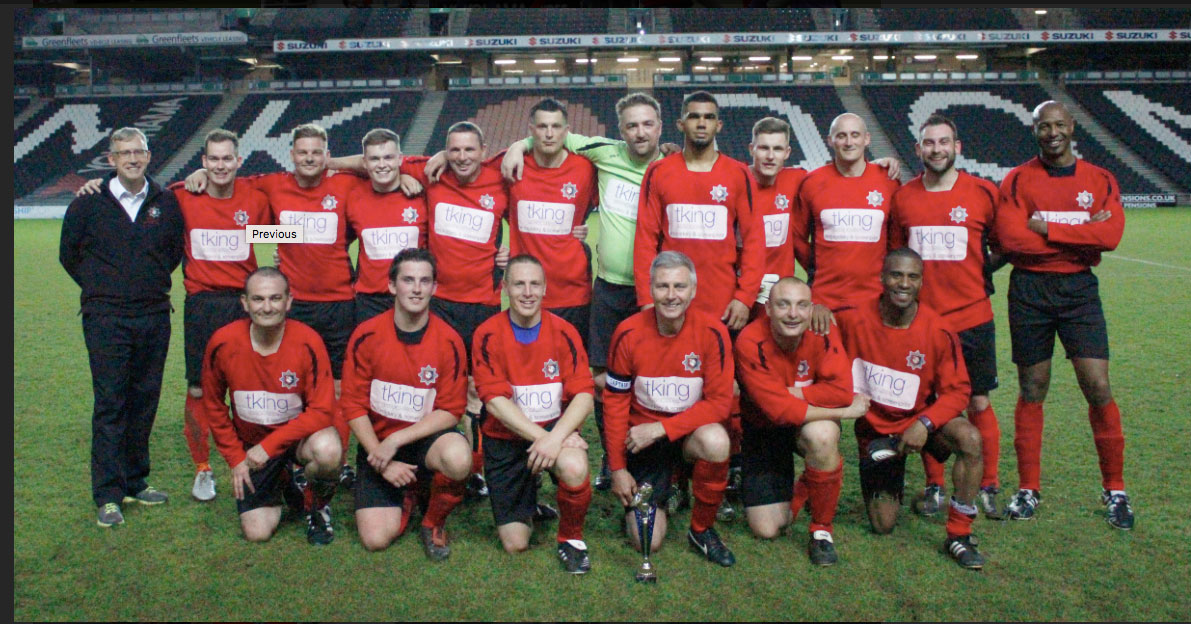 Before kick off  there was a minutes silence held to pay respect to two Thames Valley Police officers who have sadly lost their lives within the last couple of months.

The game was played in good spirits, but after last years heavy defeat Bucks Fire were in no mood to walk off the pitch empty handed. After going behind just before half time to what looked like a dubious goal, Bucks Fire regrouped during half time and came out stronger in the second half. Shaun Carr a Firefighter from Great Holm Fire Station (who was terrorising the Police defence all night) Was awarded a penalty, Shaun picked himself up, but must have left his composure on the ground as the ball sailed over the bar . Shaun however did regain some pride by scoring a good goal shortly after his miss and from then on there was only going to be one winner. Shortly after Shaun’s goal Bucks Fire won a free kick on the edge of the box, with Paul Dearlove (an Apprentice Firefighter from Buckingham) over the ball it was bound to be a great delivery, it was, and it resulted in a well taken goal. Bucks Fire managed to see out the remaining 25 minutes with ease, with Craig Newman (A Senior BI Analyst from Service Head Quarters) in goal having little to do and the game ending 2-1.

A big thank you to all the supporters from Bucks Fire and Rescue Service, Thames Valley Police and the local community. The generous donations received will really made a difference to four fantastic charities.

The money will be counted and the grand total will be published, but we look on track smash last years £4,000 total.

Role information: The Business Fire Safety Advisor will ideally have experience of fire safety; however, this is not essential. This role will be subject to Support Services terms and conditions. The successful applicant must be proactive, enthusiastic, and able to…
END_OF_DOCUMENT_TOKEN_TO_BE_REPLACED

Role information: The Business Fire Safety Inspector will ideally have current qualifications and experience of fire safety, though this is not essential. The successful applicants must be proactive, enthusiastic, able to work on their own and as part of a…
END_OF_DOCUMENT_TOKEN_TO_BE_REPLACED

Terry has given outstanding service to our communities since the early seventies, in numerous operational roles across the county, before retiring a couple of years ago from his operational career as Group Commander to continue in a non-operational role, supporting…
END_OF_DOCUMENT_TOKEN_TO_BE_REPLACED

An exciting opportunity is developing within BFRS which will see support members of staff providing additional support to their operational colleagues by responding to emergency incidents. The Corporate Plan, approved in 2015 highlighted the need, where appropriate, to move to…
END_OF_DOCUMENT_TOKEN_TO_BE_REPLACED

We use data to identify the groups that are most at risk, recognising trends against local and national statistics, to pinpoint areas to address through targeted engagement. Business and Systems Integration (BASI), is developing a new Premises Risk Management System…
END_OF_DOCUMENT_TOKEN_TO_BE_REPLACED